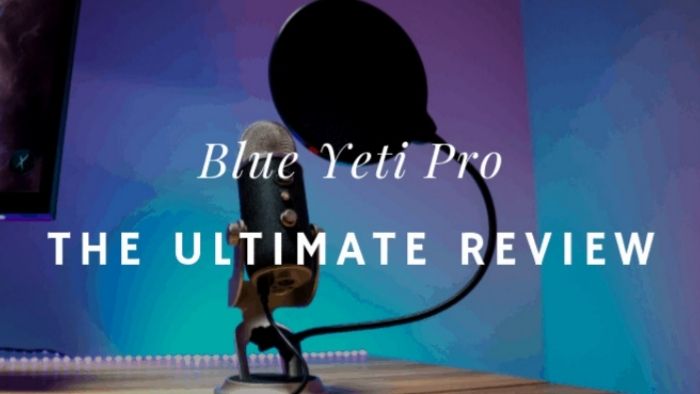 It was designed to serve consumers in need of an elite-function USB mic at a reasonable price. This guide broadly focuses on the features of the mic and expert opinion on why you should or should not buy it.

The Blue Yeti Pro is the first USB microphone in the world. It features a digital recording resolution of 24-bit/192 kHz with analog XLR output. The device also comes with four unique pattern settings. Besides, it has three custom condenser capsules.

You can use it to record digital audio with four times the resolution of audio files found on CDs. Additionally, you can use its analog circuit path and A-D converter chip with professional pre-amps and studio mixers.

The USB microphone boasts of direct controls for microphone gain, mute, pattern selection, and headphone volume. It also features an inbuilt headphone amplifier. With these cutting-edge features, the Blue Yeti Pro is ideal for use at home, outdoors, or in a studio. Discussed below are other key features.

The 4 inbuilt pattern modes on the mic include bidirectional, unidirectional, cardioid, and stereo. The bidirectional mode is for capturing sound using both the rear and front sides of the Blue Yeti Pro. It makes it possible to record interviews or the nuance of a musical instrument.

For a live recording, the omnidirectional mode comes in handy. It enables the mic to capture sounds from all directions.

The cardioid mode enables the microphone to pick up sounds that are in front of it. It is ideal for game streaming, vocals, and podcasts. The stereo mode, on the other hand, lets the mic use both left and right channels when picking up sounds. It is perfect for picking up a realistic, sound image.

Blue Microphones included a custom base on the Yeti Pro to act as a threaded mic stand. The custom base is also for facilitating cable management. It provides fundamental support for the mic when it is in use.

The Blue Yeti Pro can run on selected Windows and Mac PCs. It is compatible with a Macintosh computer that features Apple’s Mac OSX (version 10.6.4 and above), 256MB RAM, and USB 2.0 High Speed.

It can also work on a Windows PC that supports Windows XP Professional, XP Home Edition, Vista, 7, and Windows 8. The Windows PC should also have a RAM of 256MB and support USB 2.0 High Speed.

The Yeti Pro is ideal for use in sound engineering activities. This is because it comes with an A-D converter chip and analog circuit path. These features make it easier for you to attach the mic to your preamp or studio mixers.

The standard audible frequency range for devices such as headphones is 20 to 20,000 Hz. The Blue Yeti Pro meets the accepted range for vocal mics, which is 80 Hz to 15,000 Hz. Frequency response, in this case, refers to the range of treble, mids, and bass in sound.

The mic lets you capture studio-quality audio through a digital USB port. It also boasts of a custom-designed desk stand with an adjustable angle.

You will not need any driver to install it on your Mac or Windows computer. The color options available for the USB microphone include black, white, silver, and platinum.

One of the most important built-in controls in the Yeti Pro is the headphone amplifier. This inbuilt tool makes it possible for you to track the latency of captured sounds.

You can also rely on direct controls to increase the microphone’s volume. As well, select pattern modes, mute the mic and adjust the headphone volume.

How the Blue Yeti Pro Compares to its Competitors

USB microphones such as the Yeti Pro are eliminating the need for musicians and podcasters to rent out a studio for a quick sound recording. Such mics are good at getting rid of background noise that affects the clarity of a sound recording.

What makes the difference between Blue Yeti Pro and other USB microphones in the market?

The Rode Podcaster is a dynamic USB microphone that boasts a narrower frequency response than the Yeti Pro. The mic is ideal for capturing live sounds or record percussion. Yet, it is not as sensitive as Yeti Pro, which is a condenser mic.

The Blue Yeti Pro boasts of a broader frequency response range. It is perfect for recording acoustic instruments and vocals. Due to its high sensitivity to loud sounds, musicians are at ease with quick recordings.

The Rode Podcaster is suitable for home use. It has an 18-bit resolution and sampling that ranges from 8-48 kHz. Nonetheless, Blue Yeti Pro works well when used for professional recordings. It has a 24 bit/192kHz resolution.

The Rode Podcaster, which only supports a cardioid polar pattern, can pick up sounds from one direction. On the other hand, the Blue Yeti Pro supports four different polar patterns. Hence allowing you to choose the one that can produce the highest-quality recording.

It is safe to say that the Blue Yeti Pro is the superior microphone. It gives you the best recording. This is due to its high recording resolution, condensed microphone type, and support for four polar patterns. It will blow your expectations when you use it to record a live event or a single instrument.

Blue Yeti Pro vs. Audio-Technica AT2035

The Audio-Technica AT2035 is a condenser microphone just like the Blue Yeti Pro. The versatile mic is great for live sound recording. Both Yeti Pro and AT2035 can manage high sound pressure levels. Also, the Yeti Pro is more sensitive than the AT2035. Hence, making it more favorable for recording acoustic instruments and vocals.

The AT2035 condenser mic features a recording resolution of 16 bit/48kHz, which makes it suitable for home use. On the other hand, the Blue Yeti Pro is ideal for both home and professional use.
Additionally, it comes with a recording resolution of 24 bit/192kHz. It means that you can rely on it to make high-quality podcasts, webcasts, or other sound recordings. Both devices also fall under the condenser microphone category.

The Blue Yeti Pro has unbeatable features, unlike most USB microphones. Though other microphone manufacturers are trying to emulate its features, they are lagging behind. When it comes to making a condenser microphone with a higher recording resolution. The unique selling point of a USB mike lies in its multipolar pattern support and resolution.

Pros and Cons of the Blue Yeti Pro

While the Blue Yeti Pro boasts of several impressive features, it is important to look at both sides of the coin. You can make an informed purchasing decision after assessing its advantages and disadvantages.

That said, here are the pros and cons of the USB mic in detail.
Pros

Is the Blue Yeti Pro Microphone Worth Buying?

By looking at its cutting-edge features, you can tell that the Yeti Pro is among the most suitable mics for making podcasts. It is a great USB mic for personal sound recording projects. Blue Yeti Pro can be worth buying for you if you are in need of a USB mic with a high digital audio recording resolution. The device suits you if you do not mind spending $189.99 to buy it.