More people in the 21st century are struggling with excess weight and obesity than ever before.

As you know, weight loss is not always as easy as it sounds. This is why multiple supplements, as well as diet plans, are offered as successful strategies for losing weight and overall health improvement.

Glucomannan is one of the most popular natural dietary fibers, which is actively being promoted as an effective supplement for weight loss.

In this article, you can find out everything you need to know about glucomannan, its effect on weight loss, as well as other health benefits, risks, and safety issues.

So what is glucomannan exactly? 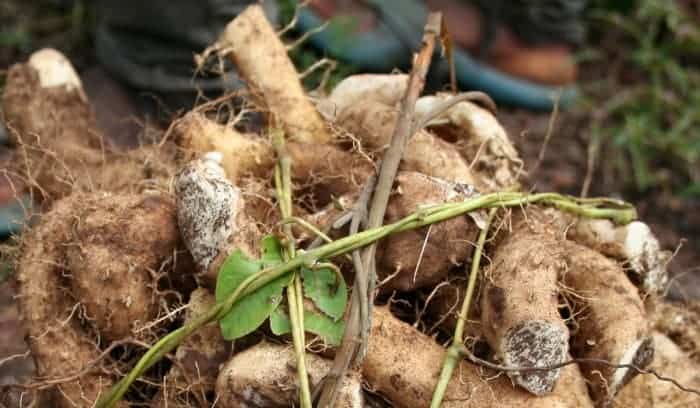 Glucomannan is made of the Asian plant Konjac roots, which grows in China, Japan, Indonesia, and other countries in the Southeastern part of the continent.

Since glucomannan has an amazing ability to absorb water and is one of the “stickiest” of all fibers known, it is commonly used as a thickener for various food products such as flour and pasta.

Fiber is a well-known ingredient in some traditional Asian foods, like konjac jelly, tofu, noodles, yam cake, and others.

You can recognize the additive in the ingredient list of different foods under the number E425-II.

It is also readily available in tablets, capsules, and powder and is one of the main ingredients of the shirataki noodles, which are often referred to as “miracle noodles.”

Since it has been introduced to the Western world, it has become a popular natural weight-loss supplement and the main ingredient of popular diet pills such as Lipozene.

Historical use of konjac glucomannan

The first records of the medicinal properties of glucomannan are from the times of the Western Han dynasty in ancient China.

People in China have been using natural substances for over 2,000 years to treat various health problems, including cough, asthma, burns, skin diseases, hernia, and blood-related diseases.

It was officially introduced as a medicinal product in Japan in the 6th century as well.

The FDA approved glucomannan as a food additive in 1994 and as a meat product binder in 1996.

How does glucomannan promote weight loss?

As mentioned previously, glucomannan is a water-soluble dietary fiber. Like other similar fibers, it is believed to help boost weight loss in the following ways:

There are contradicting results from the various studies of correlations between glucomannan and weight loss.

An early study showed that taking 1g of glucomannan before each meal helped obese subjects shed an average of 5.5 lbs. for eight weeks.

Reviews of several other studies show that glucomannan can have a positive but minimal effect on weight loss.

Short-term weight loss was found in obese subjects in another study of the effect of glucomannan on body weight.

Another study, including people being assigned with a 1,200 calorie daily diet and glucomannan supplements, found that the subjects who took the supplement lost an average of 3.7 lbs. more than the group given the placebo.

A review of the various studies on the effect of glucomannan supplements on weight loss from 2015 concluded that the insoluble dietary fiber could help obese or overweight subjects reduce their weight, but without their BMI being affected.

Two European studies of the effect of glucomannan supplements on the weight of the subjects found that those who took the supplements lost approximately 1.76 lbs. per week more than the group which was being given a placebo, but that also the group taking the glucomannan ended up with lower LDL cholesterol levels and felt more satiated overall.

Then again, 10 separate large-scale studies did not find any significant weight loss in the subjects given the glucomannan supplement in comparison to the group given the placebo.

20-year-long research on the effect of glucomannan and other natural fibers on weight loss also didn’t find any significant evidence of such a correlation.

On a positive note, some scientists have confirmed that fiber supplements can actually promote weight loss, but only when combined with a controlled, lower-calorie diet.

From the scientific data, it can be concluded that glucomannan and other water-soluble fiber can help promote weight loss but not reduce the fat in the body.

This type of fiber will help people feel fuller for a longer time and thus reduce the intake of calories, but if the overeating is due to stress, boredom, or other issues, rather than actual hunger, then these supplements cannot really help boost weight loss.

Fiber is healthy and should be included in all diets, but expectations that water-soluble fiber can help induce weight loss without making changes to the lifestyle and diet are not realistic.

Other potential health benefits of glucomannan

Glucomannan is also used for its health benefits, which according to several separate studies, include:

How to take glucomannan supplements for weight loss?

If you are planning on taking glucomannan to promote weight loss, the proper dosage is 1g of glucomannan taken 30 minutes prior to a meal, three times a day.

Due to the fact that glucomannan can quickly expand to up to 50 times its size and weight, it should be taken in lower doses than other dietary fiber supplements.

Please note that there will be absolutely no effect on the weight if the glucomannan is not taken prior to every meal (from 15 minutes to 1 hour before eating).

Also, note that the dosages differ if you will be taking glucomannan for constipation, for high cholesterol, for type II diabetes, and also in accordance with your age.

The National Institute of Health has reported that the findings of the positive effect of glucomannan on weight loss in the different researches show “little or no effect on body weight,” and warns about the potential adverse effects of glucomannan including “significant safety concerns for the tablet forms which might cause esophageal obstructions, but few safety concerns for dosages of up to 15.1g a day of other forms for several weeks.”

Since glucomannan can expand its size to up to 50 times after absorbing water, it is considered as likely unsafe for children and potentially unsafe for adults when taken in the form of tablets for the risk of causing choking or intestine blockage.

Another potential risk of long-term use of glucomannan is malnutrition, which can result from the soluble fiber stopping most of the beneficial nutrients from being absorbed by the GI tract and the human body.

You should also be warned that glucomannan can also interfere with the effect of other medication you may be taking by decreasing the amount of medication being absorbed by the body.

This is why you should always take glucomannan at least an hour prior to taking any other oral medications.

Final verdict – should you take glucomannan?

There is some scientific evidence regarding certain glucomannan supplements and their positive effect on weight loss.

But then, many of the other studies conclude that dietary fiber alone cannot induce weight loss. Rather, supplements like glucomannan need to be combined with a low calorie, controlled diet and an increase of the activity level for better overall and long-term results.

Even though the risk of taking glucomannan is not deemed as serious as the risk of taking other diet pills and supplements on the market, there are still some potential risks and adverse effects, including a choking hazard, intestinal blockage, GI tract problems like diarrhea, constipation, and flatulence, as well as malnutrition.

So, if you take the natural soluble fiber in accordance with the recommendations, your health can benefit from it.

You can also add it to your diet by preparing any of the delicious recipes, including shirataki noodles, which have glucomannan as their main ingredient.

But if you are looking for a way to lose weight permanently, then although glucomannan can help promote the weight loss process, it can hardly do it alone without effort from your side, including – a reasonable, lower-calorie diet and an increase of the activity levels.