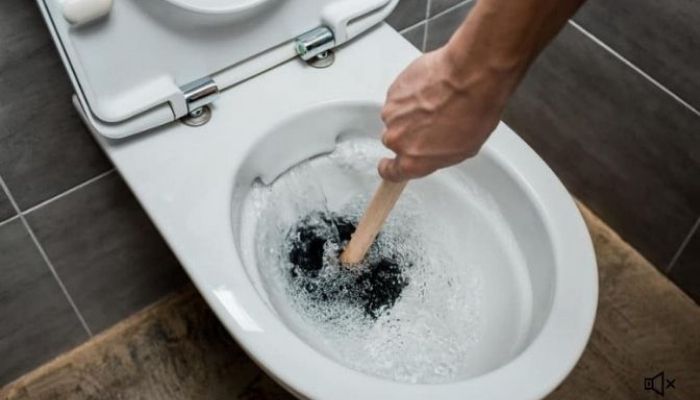 Toilet noises are a cause for alarm as they may indicate a problem with your piping unit. Gurgling is one that you may encounter. The sound is similar to that of boiling water, though with a higher pitch.

In severe cases, the bowl may overflow or, the toilet flushes itself. If you are new to such occurrences, it may be pretty scary. While you should not panic, the washroom utility requires immediate attention.

So, why is the toilet gurgling? The primary cause of this problem is negative pressure. It affects the airflow in the pipes. There are also secondary causes of this issue. Stick on as we look at the causes and possible remedies to this hitch.

As earlier mentioned, the main cause of these toilet noises is negative air pressure. This imbalance comes due to many issues; highlighted below are the usual ones.

A major cause of the gurgling is a blocked toilet. In this case, there is material obstructing the water passageways. The clog causes a backflow of air and water, leading it back to the bowl.

The good thing is that this problem is easy to solve. Signs of a blocked toilet include material floating on the bowl’s water. The floating matter may give you a hint of what is causing the obstruction. For instance, if you see paper pieces, it is a possible indication of papers blocking the pipes.

A thing to know is that there are things that should not go into the toilet bowl. Such include plastic bags, wet wipes, and even small items like cigarette butts and Q-Tips. Only dis-solvable stuff should go into the bowl.

The standard toilet paper is very soft and disintegrates on exposure to water. That is not the same case as the items mentioned. They may pile up over time and cause clogging.

A plunger will help you deal with a clogged toilet. Start by removing the floating pieces on the bowl water. Wear some gloves and remove them by hand. Now bring the plunger, ensuring it covers the entire drain hole.

Push it several times, to create a suction force to draw the items in the pipes. If the problem is small, you will see the cloggers coming to the surface. Water and air will now have a clear passage.

If the clogging debris is too much, a plunger may not be that useful. Here, you need a plumber’s snake to drill the clogs. This equipment will dislodge the obstruction by drilling to clear the pipes. You insert it through the drain hole and push it until you reach the clog. You now work it.

There are three types of plumber snakes, these include the closet auger, drum auger, and Roto-rooter. The latter two are very powerful and can even get rid of tree roots. The closet auger is quite simple, the second option after a plunger.

If you don’t have a plumber’s snake, use a garden hose. However, be careful not to flood the toilet bowl.

The other probable cause of negative pressure may be an obstructed drain line or main line. To handle your plumbing needs, you should know the drain line vs. main line differences.

You may have a blockage in the drain line or main line, which may be quite a hassle to solve. A redeeming factor is that it is easy to point out the problem.

If the problem only affects one part of the piping, like the toilet, the drain line may be the affected part. However, if all systems fail, the issue may be with the main line.

When unclogging the toilet fails, you shift your focus to these drainage systems. A problem with the drain line presents similar signs to that of a clogged toilet. Besides the sounds, you may also notice a bad odor and slow drains. In severe situations, there may be a backflow of sewage.

If it is the main line, you can confirm with your neighbors. If they have similar problems, the sewerage system may be faulty. Additionally, you may notice lush vegetation in the areas where the drainage passes. This indicates a leak.

The solution to a blocked drain line or main line starts with the identification of the problem. Once you locate the hitch, you reduce your workload. If the obstruction is near the toilet, a plumber’s snake can do away with it.

However, if far set, it may be pretty complicated, requiring a plumber’s services. A thing to note is that the mentioned solutions are for drain line hitches. Main line issues are for the municipality or the relevant authority to solve.

Dealing with main line blockages may lead to your prosecution, vandalism. Sometimes, you may need extra manpower, particularly if dealing with a tree root intrusion.

Tree roots seek water, and they may find their way to your pipes. This causes severe obstruction, with the sole solution being the removal of the roots.

The vent stack is the pipe that extends to a house’s roof from the drainage system. It plays a crucial role in ensuring there is ample air pressure in the drainage system. The pipe prevents vacuum creation, which may cause an obstruction. Moreover, it helps in the elimination of odors.

Blockage of the vent stack will cause negative pressure, leading to toilet gurgling. Clogging can come from bird nests, debris buildup, and physical damage.

Other than toilet gurgling, bad odor is another sign of a malfunctioning vent stack.

Start by inspecting this part to determine the problem. If it is a bird’s nest blocking the airway, remove it. Be careful not to push the nest down the pipe, further jamming it. A concrete way to solve this issue is by replacement.

Cut the pipe, remove the obstructing element and fix a new one. This will also help deal with damaged vent stacks.

As the saying goes, prevention is better than cure. It applies to this toilet noise. Here, you focus on preventing the problem, rather than solving it. Prevention is simpler and cheaper. The following are some of the measures to bank on.

The Toilet Should Not Be a Dumpsite

As you now know, toilet clogging is a major reason for disturbing noises. Prevention of its blocking requires immense discipline from the users. Do not convert the bowl to a dumpsite! Only water-soluble material, like toilet paper, should go to the toilet.

Things like wipes and plastic items should not go into the bowl. While some items have a flushable tag, it does not mean that they are not a blocking hazard. Put items like diapers, sanitary towels, and cigarette butts in the garbage bag for proper disposal.

Roots present a tough problem on both drain lines and main lines. Clearing the vegetation prevents their encroachment. Be keen on lush growth along sewer lines, as it may indicate a burst pipe.

Check On Your Piping System

Worn-out pipes are more prone to blockages. Conduct regular inspections to see if any part needs attention. For example, inspect the vent stack to see that there is no obstruction, mostly from animals that want to convert it to a home.

Toilet gurgling may catch you by surprise, making you wonder what the problem is. We learn that this noise is due to negative pressure in the toilet’s drainage system. Essential points to take home are the causes of this phenomenon and possible remedies.

Be keen on the prevention measures to keep the gurgling at bay.

1 thought on “Toilet Gurgling! Here’s What Causes It and How to Fix It”